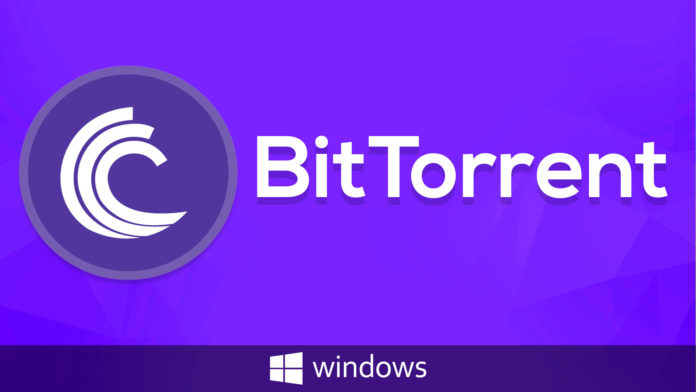 BitTorrent is a P2P protocol, designed by Bram Cohen, for sharing a large file among a set of peers. However, the term sharing in this context is different from other filesharing protocols. Instead of one peer allowing another peer to download the whole file, a group of peers takes part in the process to give all peers in the group a copy of the file.

File sharing is done in a collaborating process called a torrent. Each peer participating in a torrent downloads chunks of the large file from another peer that has it and uploads chunks of that file to other peers that do not have it, a kind of tit-for-tat, a trading game played by kids. The set of all peers that takes part in a torrent is referred to as a swarm. A peer in a swarm that has the complete content file is called a seed; a peer that has only part of the file and wants to download the rest is called a leech. In other words, a swarm is a combination of seeds and leeches. BitTorrent has gone through several versions and implementations. We first describe the original one, which uses a central node called a tracker. We then show how some new versions eliminate the tracker by using DHT.

BitTorrent with a Tracker

In the original BitTorrent, there is another entity in a torrent, called the tracker, which, as the name implies, tracks the operation of the swarm, as described later. Figure  shows an example of a torrent with seeds, leeches, and the tracker. 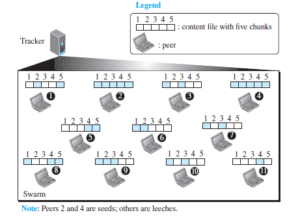 In the figure, the file to be shared, the content file, is divided into five pieces (chunks). Peers 2 and 4 already have all the pieces; other peers have some pieces. The pieces that each peer has are shaded. Uploading and downloading of the pieces will continue. Some peers may leave the torrent; some new peers may join the torrent.

Although the process of joining, sharing, and leaving a torrent looks simple, the BitTorrent protocol applies a set of policies to provide fairness, to encourage the peers to exchange pieces with other peers, to prevent overloading a peer with requests from other peers, and to allow a peer to find peers that provide better service

To avoid overloading a peer and to achieve fairness, each peer needs to limit its concurrent connection to a number of neighbors; the typical value is four. A peer flags a neighbor as unchoked or choked. It also flags them as interested or uninterested.

In other words, a peer divides its lists of neighbors into two distinct groups: unchoked and choked. It also divides them into interested and uninterested groups. The unchoked group is the list of peers that the current peer has concurrently connected to; it continuously uploads and downloads pieces from this group. The choked group is the list of neighbors that the peer is not currently connected to but may connect to in the future.
Every 10 seconds, the current peer tries a peer in the interested but choked group for a better data rate. If this new peer has a better rate than any of the unchoked peers, the new peer may become unchoked, and the peer with the lowest data rate in the unchoked group may move to the choked group. In this way, the peers in the unchoked group always have the highest data rate among those peers probed. Using this strategy divides the neighbors into subgroups in which those neighbors with compatible data transfer rates will communicate with each other. The idea of tit-for-tat trading strategy described above can be seen in this policy.

To allow a newly joined peer, which does not yet have a piece to share, to also receive pieces from other peers, every 30 seconds a peer randomly promotes a single interested peer, regardless of its uploading rate, from the choked group and flags it as unchoked. This action is called optimistic unchoking.

The BitTorrent protocol tries to provide a balance between the number of pieces each peer may have at each moment by using a strategy called the rarest-first. Using this strategy, a peer tries to first download the pieces with the fewest repeated copies among the neighbors. In this way, these pieces are circulated faster.

In the original BitTorrent design, if the tracker fails, new peers cannot connect to the network and updating is interrupted. There are several implementations of BitTorrent that eliminate the need for a centralized tracker. In the implementation that we describe here, the protocol still uses the tracker, but not a central one. The job of tracking is distributed among some nodes in the network. In this section, we show how Kademlia DHT can be used to achieve this goal, but we avoid becoming involved in the details of a specific protocol.