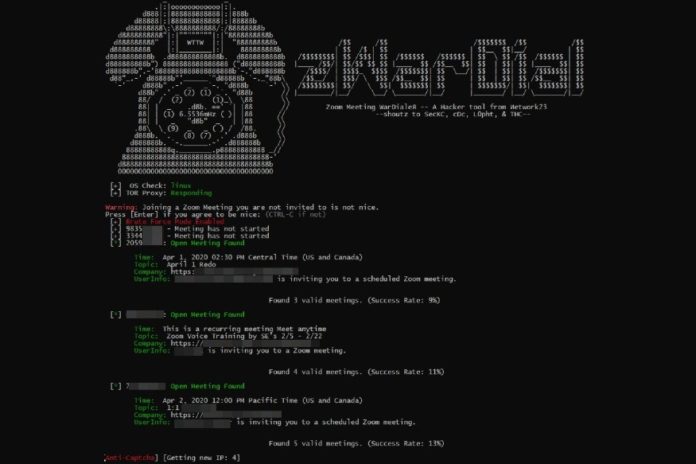 Despite all its recent apologies and hyperbolic justifications of how and why things may have gone wrong, the sheer volume of security inadequacies makes Zoom, a strict company to trust. Now, a collaboration between an independent cybersecurity researcher Trent Lo and members of SecKC in the USA has revealed just how vulnerable Zoom continues to remain, and whatever security steps it has attempted to highlight are still pretty much ineffective. To prove this, Lo and his colleagues built zWarDial, an automated tool that let them use the war dialling technique to identify open Zoom meetings and breach them.

The tool uses a known technique of war dialling, which essentially attempts to brute force process a serial of numbers to dial bulk numbers quickly. zWarDial particularly useful for calling on services that do not have adequate protection against such brute force techniques, and primarily use a string of numbers as the ID. zWarDial used to track down Zoom meeting IDs and attempt to breach them to get unauthorised access, which in turn explained not just how vulnerable. But also how seemingly easy it might be for malicious attackers to hack into ongoing Zoom meetings — an act that has become unduly popular as ‘zoombombing.’

According to information disclosed in a report by a fellow security reporter, Brian Krebs, zWarDial could find about 110 ongoing Zoom meetings each hour, hence processing over 2,000 Zoom meetings across the world in a single day. Earlier this year, before become so popular, Zoom had informed Check Point Security that it had fixed a vulnerability where users could use brute force algorithms to identify Zoom meetings. zWarDial very quickly nullifies the claim by directly routing its traffic access through Tor — something that is the least that an attacker would do.

That is not all — Zoom, in updated privacy policies and various statements to the media, had stated that it had updated its system in a way where all meetings are password protected by default. This is a skewered statement since zWarDial could find plenty of open meetings held on Zoom, which could be accessed once the brute-forced IDs entered on the app. Zoom does put some of the onus of the security flaws back on the user. While as a user, it is always imperative that a strong password is used for any activity online, these may pertain mainly to primary users that leave default settings on.

Through zWarDial, the security researchers found that the tool returned a 14 per cent success rate of identifying open meetings. With Zoom now being used by millions across the world, even the 14 per cent vulnerability rate would leave million exposed to privacy breaches and data theft. In his last blog post, Zoom founder Eric Yuan had announced a three-month freeze in any new feature development and vowed to fix all security issues with his service. It will be interesting to see how Zoom manages to fix these issues, and just how many more such vulnerabilities found in the app.

ABOUT US
This is Ansh Bhawnani from India. I'm an aspiring learner of ethical hacking and technology and try to share whatever I learn from the Internet. I am currently a student of Engineering in Computer Science. I am a newbie to the world of technology but try to learn anything and everything and I hope you like my content!
Contact us: [email protected]chsolutions.in
FOLLOW US
© Newspaper WordPress Theme by TagDiv
MORE STORIES